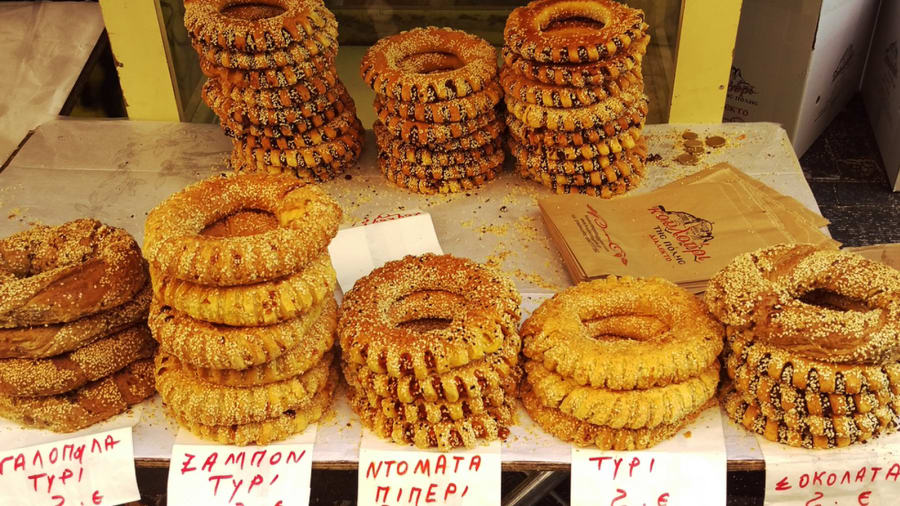 Athens (CNN) — When morning coffee is served as thick, dark and potentially brain-exploding as this, we can only be in Athens.

We're being served this potent, unfiltered concoction, brewed together with sugar in a traditional brass pot over a gas flame, as fortification for a food tour of the Greek capital.

No other drink, apparently, will do.

"Tea is for the sick and the infirm," says Diana Kantaroglou, a guide with the Alternative Athens tour company (+30 69 51 51 85 89), who's leading us around some of the best culinary haunts in Athens.

And we're in no particular rush to get going.

"Greeks are heavy coffee drinkers," adds Kantaroglou. "We also like to socialize in cafes unlike, say, the Italians with their quick drink-and-go espresso shots."

Once finished, we turn over the cups and let the residue run down inside; there are still professional coffee readers who will predict your future from the resulting pattern.

None are present so early in the morning, so we put our fate in Kantaroglou's hands and head out.

We're on the trail of some of the best street food in Athens -- a culinary scene that's changed rapidly in recent years as Greek economic woes and the recent European migrant crisis have had an unexpectedly delicious impact on the city's eating habits.

Kantaroglou brings us to the Athens meat and vegetable market where all Greek staples are on show.

But we have to go elsewhere for the basic ingredient of the Greek diet: olive oil.

"We're the world's third top producers of olive oil and its biggest consumers," Kantaroglou tells us as we enter Lalades (Lalades, 3 Plateia Agion Anargyron, Athens; +30 21 0325 5407), a Greek deli at Agion Anargyron square. "We use 18 liters per capita every year."

Inside the deli, everything is ready for an olive oil tasting as serious as anything encountered in a French winery.

We dip bread into little oil jars and then chew slowly to savor the essence.

We all love the extra virgin oil from the Aegion region of the Peloponnese, pressed cold, with its low acidity.

We're also fond of "agourelaio," used for salads and grilled fish, a bitter oil from unripe olives responsible for the aroma of many a Greek holiday island meal.

"In Greece we transport beehives where there's food for the bees," says tour guide Kantaroglou. "So there are three types of Greek honey made from thyme, pine or blossoms.

"Thyme honey is the most expensive as there's less of it; the herb blooms for only two weeks in July and it's only then that bees can feed on its tiny pink flowers."

"We use honey all the time as a sweetener replacing sugar, but also at breakfast poured into yoghurt."

6 reasons to head to Greece in winter

Falafels at midnight? The Felafellas have got your back.

At the mention of breakfast, we head to Psiri, nowadays the prime nightlife district, for a traditional Greek morning confection: "bougatsa," a filo pastry filled with custard. (Bougatsa Thessaloniki, 1 Plateia Iroön, Athens; +30 21 0322 2088)

Originating from Thessaloniki in northern Greece, the bougatsa is substantial yet light. Its crisp filo complements a creamy filling, while a cinnamon dusting binds the flavors together.

Thessaloniki also gives us koulouri: a baked dough ring with sesame that's been compared to German pretzels or Jewish bagels.

This is the ultimate Greek street food, costing just a dollar. It's typically on sale from early morning as vendors try to cash in on the hangover munchies of late-night revelers heading home.

It may be humble, but it's causing a small food revolution in Athens.

In March 2016, the new Oven Sesame franchise (Oven Sesame, Aiolou 17, Athens; +30 21 0323 0038) started experimenting with the traditional round shape and with fillings that range from cheeses and salads to meats and even ice cream.

"With the economic crisis, value for money is king; you want something substantial of good quality and taste," he says. "Street food was not always high level, but the low price contributed to its appeal and its return."

The recent influx of Middle Eastern migrants has also had an influence, he says.

"There was no falafel-eating culture in Greece for instance, but the Falafellas (FalafellasAiolou 51, Athens; +30 210 3239 809) takeaway opened in the center of Athens and people went crazy."

Which Greek island should you go to?

Return of the classics

Such internationalization is amply demonstrated with Chef and the Dog (Chef and the Dog, Loukianou 21b, Athens; +30 21 0724 8889), a takeaway restaurant that offers creative hot dogs -- not a traditional Greek street meal.

Its range of hot dogs -- German, Japanese katsu, Korean, Mexican, even lobster -- as well as its low prices and long hours has made it the hip alternative to koulouri stands amongst the young.

Kioftes (or Keftes) is the Greek equivalent of falafel, an indigenous on-the-go street food and as such the main ingredient of Athenian picnic baskets.

Hidden away from the street by giant jasmine creepers, Kioftes has been a runaway success using "grandma's recipes from Smyrna dating from 1904" reminding many Greeks of their own migrations from the Middle East almost 100 years ago.

It has been so successful, it now aspires to be classed as full-blown restaurant offering appetizing Smyrniot dishes such as Meliassiá (bourek pastries with cheese honey and sesame), Aplotí (eggplants with cheese and tomato) and, of course, meatballs.

It's not all new. More traditional Greek street food has seen a recent resurgence.

Souvlaki (skewered grilled meat) has been reinvigorated and kebabs are back with a vengeance thanks to strict new quality controls that take the guesswork out of the ingredients.

Back on the tour Kantaroglou takes us to Kostas (Kostas, Plateia Agias Irinis 2, Athens; +30 21 0323 2971), a hole-in-the wall family takeaway since 1946 that's famed for its traditional juicy souvlaki and homemade tomato sauce.

Wrapped in a delicious, perfectly cooked pita, the souvlaki at Kostas is a reminder that the best food is often the simplest.

While versions of some Greek street food can be found from Budapest to Bangladesh, loukoumades, fried dough balls in honey and cinnamon, is as unique to Greece as the Parthenon.

Here I also drink a glass of Greece's second contribution to coffee culture.

Cold frappé is made from Nescafé instant powder beaten with cold water and ice -- a perfect thirst quencher.

Legend has it that it was created when the lack of hot water in a Thessaloniki exhibition back in the 1950s forced a Nescafé salesman to improvise and offer glasses of cold coffee all round.

It's a story reflected in today's Athens where tough times have forced a rethink of old traditions, especially where food is concerned.

Because whatever the economic conditions, Athenians will never stop eating well -- gastronomy, after all, is a Greek word.