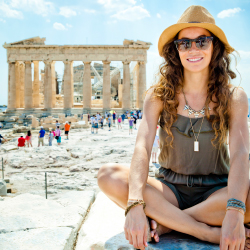 raveling with teenagers is an art. They have opinions — often strong ones — that can make or break a vacation. Fly them halfway around the world to a place like Athens, Greece; sprinkle in some jet lag, cultural differences and history; and all bets are off. But a little creative touring can stack the odds in a traveling family’s favor.

There are few cities in the world that can hold a candle to Athens’ rich history, and trying to cover it all is typically the biggest mistake a traveling brood can make. Athens was my family’s last stop on a nearly two-week Mediterranean cruise onboard Carnival Cruise Line’s Carnival Vista. We had seen the Sagrada Familia in Barcelona, Spain, and the Roman Colosseum, and we had hiked Le Sentier des Ocres in Provence, France. We’d spent every day on the move, stayed up late and gotten up early. We were already tired, days before we even set foot in Athens.

Involve the Entire (Tired) Family
We didn’t have set plans in Athens, and I realized a few days before we arrived that energy levels weren’t high enough to see the attractions I wanted to visit. So as a family, over a few late dinners, we debated the possibilities. Everyone had a say, and all agreed we would cover the most ground (and remain happiest) on an electric bike tour with We Bike Athens. Admittedly, we were somewhat motivated by the idea that we could be lazy, but it wasn’t until we were rolling up and down the hills of town that we realized the beauty of the power in our pedals.

Make Every Minute Count
To maximize our time on the ground, I booked a private transfer through We Bike Athens. It was fast, efficient and just a few dollars more than hailing a cab, and We Bike Athens’ owner Natalie Lekanidis was ready and waiting for us when we arrived at the tour company’s office on Apostolou Pavlou Avenue. After she gave us some simple instructions, the entire family began pedaling. At first, feeling the power burst from the e-bike felt strange, but once we hit the first hill, we realized it was just like riding a bike — without ever breaking a sweat.

Just the Right dose of History
The Historic Athens Views tour lasts about three hours. Lekanidis doesn’t change anything when she knows teenagers are rolling along, but as the mother of two teen boys, she understands that flexibility is key and that long retellings of history will fall on deaf ears. Using park trails, city streets and off-the-beaten-path back roads, Lekanidis also knows how to let the city ring its own bell.

Tour highlights include countless Acropolis views and numerous opportunities to get off your bike, get a closer look and take pictures. Our arrival at Syntagma Square was timed to see the changing of the guard in front of the Tomb of the Unknown Soldier. The knee-lifting, slow-motion athletic march has an even higher “gee whiz” factor due to the guards’ uniforms, which include huge pom-poms on their shoes and kilts with 400 pleats (supposedly one for each year of Ottoman occupation).

We also visited Panathenaic Stadium, which was originally built in the 4th century B.C. and restored in the late 1800s; it played host to the first modern Olympic Games in 1896. We rolled through Plaka, the oldest district of Athens, and took in views of the Temple of Olympian Zeus and the Arch of Hadrian. Whether you believe the cave-like Prison of Socrates on Filopappou Hill was used for its namesake, it’s a quiet spot and not typically crowded with tourists.

Do the Tour First
Pedaling through town is a nice way to get your bearings, and Lekanidis and her guides are happy to give tips on where to eat and shop. After our tour, we left armed with a map to find lunch and our afternoon priority — the Acropolis. It’s a 10- to 20-minute hike up to the ancient citadel, so plan for at least a couple hours to explore it.

Strolling around the Parthenon was a highlight, but after spending the morning appreciating the Acropolis from below, we underestimated how impressive the actual city would be from above. Though we won’t do that climb on our next visit, we will take another e-bike tour. The extra boost to our two-wheeled excursion was just the charge our family needed to finish an epic vacation on a high note.